This is my particular diagnosis (not Celiacs which many gluten-free people suffer from.)

In eosinophilic esophagitis (e-o-sin-o-FILL-ik uh-sof-uh-JIE-tis), a type of white blood cell (eosinophil) builds up in the lining of the tube that connects your mouth to your stomach 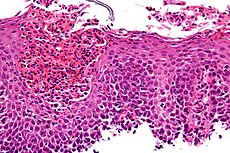 (esophagus). This buildup, which is a reaction to foods, allergens or acid reflux, can inflame or injure the esophageal tissue. Damaged esophageal tissue can lead to difficulty swallowing or cause food to get caught when you swallow.

Eosinophilic esophagitis is a chronic immune system disease. It has been identified only in the past two decades, but is now considered a major cause of digestive system (gastrointestinal) illness. Research is ongoing and will likely lead to revisions in its diagnosis and treatment.

According to the Mayo Clinic, Eosinophilic Esophagitis—EoE for short—is an allergic reaction in which the lining of your esophagus reacts to allergens, such as food or pollen, due to a buildup of a type of white blood cell called eosinophil. This buildup can inflame or injure the esophageal tissue, leading to difficulty swallowing or causing food to get caught when you swallow.

Here are a few more facts about EoE, provided by the American Partnership for Eosinophilic Disorders (APFED) on their website:

People with EoE commonly have other allergic diseases such as rhinitis, asthma and/or eczema.

EoE affects people of all ages and ethnic backgrounds.

In certain families, there may be an inherited (genetic) tendency.

In individuals with EoE, the eosinophils cause injury to the tissue in the esophagus.

EoE can be driven by food allergy or intolerance: most patients who eliminate food proteins from their diet (by drinking only an amino-acid based formula) improve. EoE may also be triggered by other environmental factors that researchers are beginning to understand.
Eosinophils are not normally present in the esophagus, although they may be found in other areas of the gastrointestinal tract.

Diseases other than EoE can cause eosinophils in the esophagus including gastroesophageal reflux diseases (GERD), food allergy and inflammatory bowel disease.

A gastroenterologist can diagnose EoE based on clinical symptoms, number of eosinophils present and tissue inflammation. 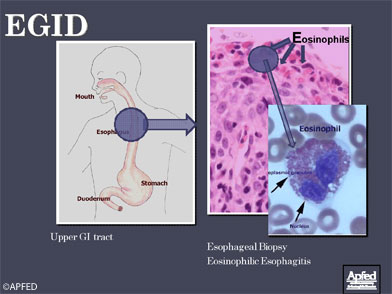 Eosinophilic Esophagitis: From Biopsy to Microscope

Eosinophilgastro Yahoo Group
Online group for parents of children with EoE & EGID, which many belong to.
It has members worldwide.
http://health.groups.yahoo.com/group/eosinophilgastro/